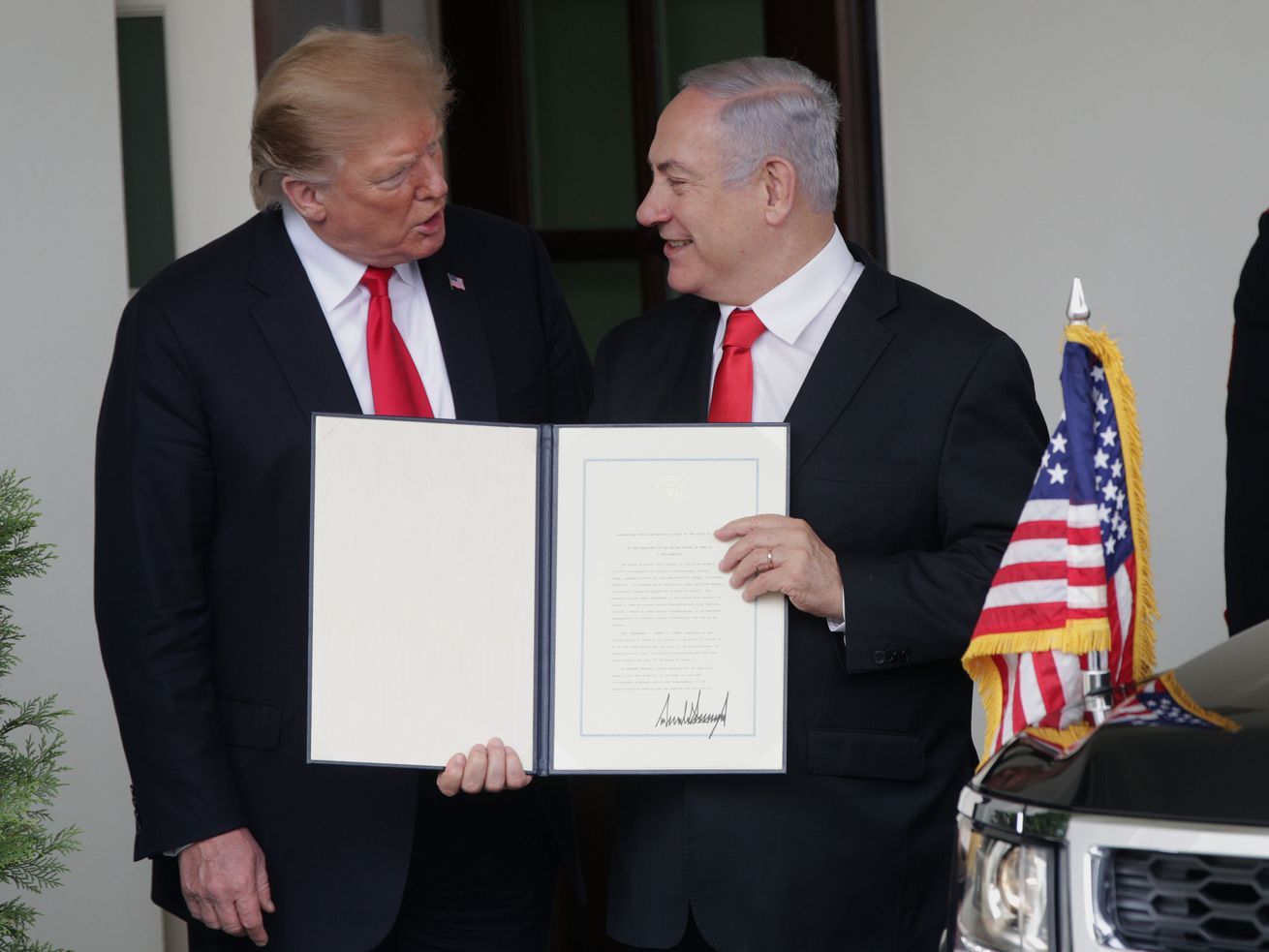 The joke is on us.

Less than 24 hours after President Donald Trump’s new handpicked attorney general announced he would not prosecute him for obstruction of justice, the president participated in a White House event with another head of state who knows a thing or two about legal problems: Israeli Prime Minister Benjamin “Bibi” Netanyahu, who currently faces multiple charges of bribery and corruption.

In a remarkable moment at the end of the event, Netanyahu made a punchline out of the very thing that has landed him in deep trouble at home and that has Trump under scrutiny from House Democrats.

“Mr. President, I have to tell you that I brought you a case of the finest wine from Golan. I understand you’re not a great wine drinker, but could I give it to your staff? I hope they don’t open an investigation on us!” Netanyahu joked, as Trump smiled and other administration officials chuckled.

NETANYAHU to TRUMP: “Mr President, I have to tell you that I brought you a case of the finest wine from Golan. I understand you’re not a great wine drinker, but could I give it to your staff? I hope they don’t open an investigation on us!” pic.twitter.com/9KMSmwFqeG

Netanyahu’s choice of wine from the Golan Heights was fitting, given a major gift that Trump recently gave him. Last week, the president made a controversial announcement that the United States will recognize the region as part of Israel — a move widely seen as aimed at boosting Netanyahu’s reelection prospects ahead of an election on April 9.

Trump, of course, is no stranger to corruption allegations. Last month, House Democrats requested documents from 81 people or entities associated with the private business Trump has refused to divest from, as part of a congressional investigation into potential corruption and other wrongdoing involving the president.

And as Vox’s Alexia Underwood has detailed when Israeli Attorney General Avichai Mandelblit announced that he planned to charge Netanyahu with charges related to corruption in late February, the Israeli prime minister used Trumpian language to deflect from his legal problems:

Similar to a certain US president, Netanyahu has accused investigators of leading a “witch hunt” against him and decried the “liberal” media for conspiring to undermine him.

In a speech on Thursday after the attorney general’s announcement, Netanyahu doubled down on these claims, calling himself “the most vilified person in the history of Israeli media,” according to the Jerusalem Post. He also vowed to continue serving as prime minister for years to come.

The charges Netanyahu faces involve allegedly receiving gifts from wealthy individuals in the US and Australia (including champagne) in exchange for tax law changes, a proposed deal that would’ve resulted in one of Israel’s major newspapers covering him less critically; trading regulatory favors in exchange for positive media coverage; and impropriety involving a $2 billion contract for military equipment with the German firm Thyssenkrupp.

Trump’s criminal exposure isn’t as serious as Bibi’s, but he has been sued for allegedly violating the Constitution’s prohibition on the president accepting gifts from foreign governments.

Netanyahu cut short his trip to Washington, DC, to deal with a flare-up of violence in the Gaza Strip that died down on Tuesday.