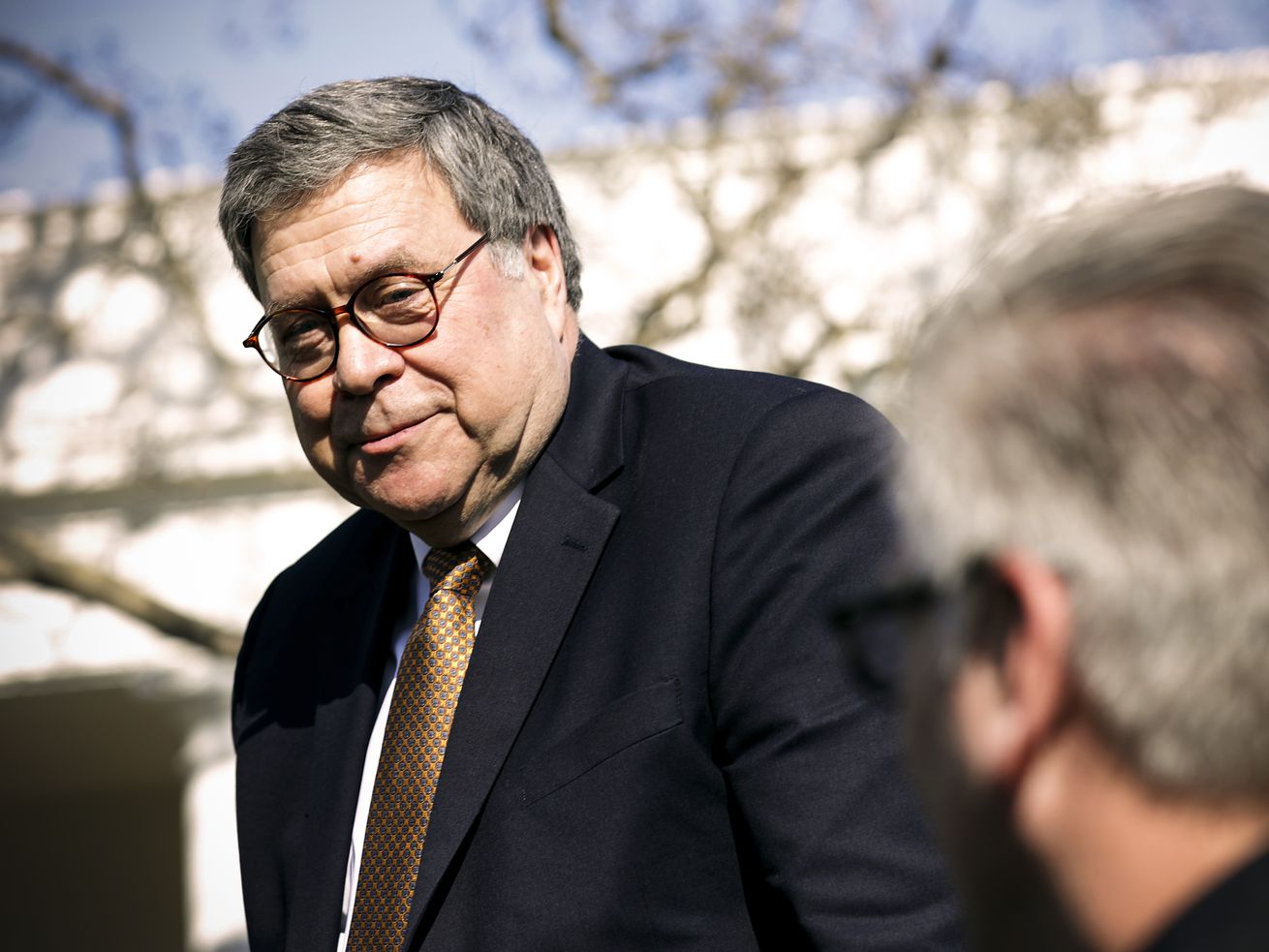 The attorney general offered his “principal conclusions” to the Mueller report, but it leaves some big questions abut the special counsel’s investigation unresolved.

Special counsel Robert Mueller did not find that the Trump campaign “conspired or coordinated” with the Russian government to meddle in the 2016 elections, according to Attorney General William Barr’s summary to Congress delivered Sunday.

Barr’s four-page letter outlines the “principal conclusions” of the nearly two-year special counsel probe, reiterating that the Russian government sought to interfere in US politics but that the investigation did not establish that Trump associates aided them in their efforts.

His summary also took up the other major element of Mueller’s investigation: whether President Donald Trump obstructed justice. Here, Barr cites language from Mueller’s report, noting that the special counsel’s office did not draw a definite conclusion as to whether the president committed a crime, but also that the report “did not exonerate him.”

Barr adds that since Mueller did not make a determination, both he and Deputy Attorney General Rod Rosenstein have, concluding that the evidence is not “sufficient to establish the President committed an obstruction-of-justice offense.”

The White House has seized on these conclusions as “total exoneration” — “No Collusion, No Obstruction,” Trump tweeted. It may not quite be that, though on the whole, Barr’s summary is favorable to the president and his associates.

But Barr’s preliminary summary letter is not the full Mueller report, which for now remains confidential. Barr’s outline of the special counsel’s findings doesn’t elaborate on why or how investigators came to their conclusions (or lack thereof). Notably, it is also Barr’s reading — with the input of Rosenstein, and likely other DOJ officials — of Mueller’s conclusions, and, with few exceptions, not Mueller’s own words.

That ambiguity means Barr’s letter leaves a few questions still unresolved. Vox’s Andrew Prokop has an explainer on what we learned from Barr’s letter. But here’s we can’t figure out from Barr’s summary.

1) How long is Mueller’s report — and how detailed is it?

Okay, this is kind of an obvious one since Barr’s letter is, by default, a summary of the report’s “principal conclusions.”

That indicates a very comprehensive probe that spanned continents. Some, maybe a lot, of that information might never be released because it’s classified for national security reasons or relies on grand jury information.

But how Mueller incorporated this evidence into a report, whether he explained where these investigative threads led and ended, will certainly offer a fuller picture of exactly what Barr means when he says that Mueller did not find that “the Trump Campaign or anyone associated with it conspired or coordinated Russia in its efforts to influence the 2016 presidential election.”

Barr’s summary says the special counsel “did not find that the Trump campaign, or anything associated with it, conspired or coordinated with the Russian government” in its efforts to interfere in the 2016 campaign, though it makes clear that Russia did meddle, and points to Mueller’s indictments against the Russian troll farm and Russian military intelligence hackers that targeted Democrats’ emails. (The special counsel defined coordination as “an agreement — tacit or expressed — between the Trump campaign and the Russian government on election interference.”)

But Barr also says Mueller did not establish coordination or conspiracy, “despite multiple offers from Russian-affiliated individuals to assist the Trump campaign.”

The “multiple offers” from “Russian-affiliated” individuals certainly sounds a lot like the infamous June 2016 Trump Tower meeting. It appears that Mueller found that this or other alleged contacts between Trump associates and Russian officials did not rise to the level of criminality, or at least did not meet the definition of “coordination” as the special counsel defined it. But the question is certainly going to be why.

3) What did Mueller find in the obstruction case?

Barr notes that Mueller examined possible obstruction of justice offenses, much “of which has been the subject of public reporting.”

So it’s not clear if Mueller uncovered anything beyond of what was already known — from firing FBI Director James Comey to harassing then-Attorney General Jeff Sessions for recusing himself from the investigation.

But on the obstruction matter, Mueller didn’t draw a definite conclusion “one way or the other — as to whether the examined conduct constituted obstruction,” Barr says in his summary.

Barr continues, in a critical paragraph:

Instead, for each of the relevant actions investigated, the report sets out evidence on both sides of the question and leaves unresolved what the Special Counsel views as “difficult issues” of law and fact concerning whether the President’s actions and intent could be viewed as obstruction. The Special Counsel’s report states that “while this report does not conclude that the President committed a crime, it also does not exonerate him.”

Mueller’s decision to note that the “report does not exonerate” him is pretty compelling, and is likely a tidbit Democrats will seize upon.

Justice Department guidelines say that a sitting president can’t be indicted, and Mueller was likely to be bound by these regulations. That means wrongdoing on the part of the president is inherently a political question, not a legal one — and that might be why Mueller did not draw definitive answers on this question. Or it might be that the situation truly is murky and Mueller could not prove conduct one way or another.

4) How much of Barr’s opinion guided the obstruction summary?

Barr, in his letter, says that after much consultation, “Deputy Attorney General Rod Rosenstein and I have concluded that the evidence developed during the Special Counsel’s investigation is not sufficient to establish that the President committed an obstruction-of-justice offense.”

Barr states that Mueller’s findings did not appear to establish beyond a reasonable doubt that the president committed an obstruction of justice defense. Barr assesses those standards on three pillars, as Vox’s Dara Lind noted:

1. There was “obstructive conduct;

2. The conduct was related to a prosecution or investigation;

3. The conduct was “done with corrupt intent.”

Barr and Rosenstein apparently agreed that Trump’s actions didn’t meet those standards, at least enough to warrant obstruction of justice charges. But they don’t offer too many details on how they arrived at this decision.

The attorney general does note that since Mueller’s evidence does not establish that Trump was part of an underlying crime, the “absence of such evidence bears upon the President’s intent” when it comes to obstruction of justice — which basically means that without collusion, there can be no obstruction.

Barr says this is not determinative — meaning it doesn’t say obstruction offenses can’t happen — but it clearly factored into their reasoning. But beyond that, he doesn’t explain their thought process in detail. And without Mueller’s underlying findings, it’s hard to gauge how strong and compelling Barr’s “no obstruction” conclusion is.

5) Is this “total exoneration”?

No, but it’s pretty good for the president and his associates — particularly on the “collusion” question.

Yet it also seems likely that Mueller’s confidential report is a very carefully written document. The rare segments Barr quotes in his summary use very precise language. For example:

As the report states: “[T]he investigation did not establish that members of the Trump Campaign conspired or coordinated with the Russian government in its election interference activities.”

“Did not establish” doesn’t eliminate the possibility that evidence existed of coordination or cooperation — but it does indicate there wasn’t enough evidence to bring prosecutions against certain individuals or a draw larger case.

The Justice Department typically doesn’t release damaging information about people if they’re not charged with any specific crimes, or explain why a matter doesn’t rise to criminal prosecution. And while it does happen, it’s done rarely and often under extraordinary circumstances.

All of which means the public probably won’t know the full spate of Mueller’s findings — which means some questions might never be answered fully.

6) When, if ever, will the public see the full Mueller report?

Who knows? Maybe never. Barr said his “goal and intent is to release as much of the Special Counsel’s report as I can consistent with applicable law, regulations, and Departmental policies.”

The applicable law, regulations, and departmental policies will be the tricky part. As mentioned above, the DOJ doesn’t typically release information about people who are not charged with crimes. Mueller also relied on confidential grand jury information, and Barr says he will need to work with Mueller to determine what information needs to be withheld.

Mueller also referred some cases to other federal prosecutors, which means some of his evidence in the final report is used in ongoing investigations and can’t be released to the public just yet.

All of this will likely prevent a full, unedited report from being made public in the immediate future. But Democratic lawmakers are almost certain to battle to get as much of it released as possible.